Grace Dovey and the Grace Dovey Dancing School were well known in Ledbury during the last century.
Even today, after nearly 100 years, the name is still recognised and yet, to the best of my knowledge, there has never been any effort made to tell the story. I hope this will be of interest.


Constance May Dovey married John William Ainsley Blenkiron in Kensington in December 1926, no children found.
He died in Guildford in 1980 and Constance, with nothing to keep her in that area moved back to Malvern where she died in The Lawn Nursing Home, Kempsey in 1990.

In her will, dated 1980, she leaves most of her estate to ' her sister Florence Grace Vernon Lloyd'.
For anyone researching family history other names listed are:
Mrs Joanna Webster, Cousin.
Mrs Janet Lenton, Cousin.
Iris Saunders, Cousin.

Charles Dovey was a dentist based in Malvern but from at least 1897 had a once weekly presence in Ledbury in Mr C. Pedlingham's store in the High St. as the advert on the right shows.


C(harles) Pedlingham's grocers shop was to the right of the alley leading to the Burgage Hall/Congregational chapel. He was here until at least 1920 by which time the shop had been converted or rebuilt into the 'London Joint City & Midland Bank Ltd.'

Having to leave these premises Charles Dovey must have taken the opportunity to move his main surgery from Malvern to Ledbury.


You may not have heard of London House, Tilleys tells us he shared the property with R H Wilks China Merchant in No 11 High Street. The title seems to have been added by Mr Dovey and used throughout his time here, the shop is currently occupied by Hay Wines.
He was here until 1944 but by 1947 he is in Southend House with his son in law (See later)
It is possible that a little information could be found about Florence Grace's early life. Some school records are available in the Hereford Archives and I may follow that up. Records of the British Ballet Organisation can be seen in Battersea, by appointment only.

As shown Grace's first name was Florence but Grace is such a perfect name for a dancer she always used it, how lucky she was that her parents gave her that second name! 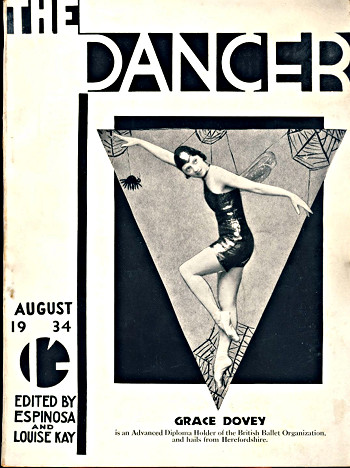 Tilleys in 1928 only records Grace as being on the committee of the Tennis section of the Ledbury Cricket and Sports Club.
The first reference in Tilleys to Grace as a dancing teacher is in the 1929 Edition under the heading:
A retrospective of the year 1928.
May 1st. Dancing display given in the Royal Hall by pupils of Miss Grace Dovey in aid of the Children's League of Pity.

This charity event became an annual fixture in May at various venues: 1947 in the Drill Hall and in the Camp Theatre from 1950 until 1956

Early references from the newspapers are from the Gloucester Citizen June 9th 1928 when 'pupils of Miss Grace Dovey of Ledbury gave an exhibition of fancy dancing at a Church Fete in Newent.' and in the Kington Times of April 16th 1932 her pupils are reported attending their 3rd (my underlining) annual dancing display at the Town Hall in Ludlow 'reaching a high level of graceful and artistic dancing'.
It would surely have taken her at least a year to train pupils to a standard where they could appear in public and the above notes suggests that she was teaching before 1927.

By 1940 she was well established and successful as advert and newpaper articles below show. 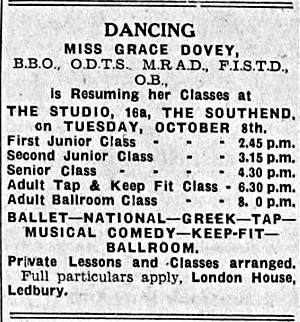 From the Ledbury Reporter
September 28th 1940.

Amongst the Dancing Successes note Elizabeth Baker was in the Higher Division.

No 16a The Southend is, unsurprisingly, behind No 16 and is now known as 'The Barn'.

In 1961 the school moved from No 16a to the barn at the back of the old George Inn, ie to the left of the Court House, where the St John Ambulance was based, and then:
From the Ledbury Reporter March 23rd 1962.

A well known local school of dancing is to change hands. When the Grace Dovey School reopens after the Easter holidays on May 7, it will be under sole ownership of Miss Elizabeth Baker and, from then, will be known as the Elizabeth Baker Dance Studio.
During the past year while Miss Baker has been in partnership with Miss Dovey. she has concentrated more on ballroom dancing while Miss Dovey has devoted her attention to ballet teaching. Now Miss Baker will supervise both sections.


The full report can be found at the bottom of this page. 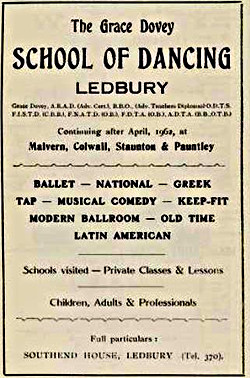 Grace, now 61, did not entirely give up teaching dance as in April of the same year (1962) this advert offering classes in Malvern, Colwall, Staunton and Pauntley appeared in the Ledbury Reporter:

The last Dovey entry in Tilleys was in the 1965 issue and shows that for the annual charity event in April 1964:

'Miss Grace Dovey and her pupils staged a superb display of dancing al Ledbury County Secondary School. The show, which attracted a crowded audience, was given in aid of Guide Dogs for the Blind and realised &pound84 12s, 7d for the fund.'


The next article tell the story better than I can.
ex Hereford Times 21st March 2003:

A BALLET school which has been a feature of Ledbury life since the 1930s is facing an uncertain future, because the building in which it meets is to be put up for sale.
The Elizabeth Baker Dance Studio is based at the St John Ambulance building, off the Southend.
Up to 50 local youngsters each week receive expert tuition from Mrs Elizabeth Lunn, who trained at the Sadlers Wells Ballet School. Now Mrs Lunn, who attended master classes taken by Dame Margot Fonteyn, has been told that, because there is no longer a St John Ambulance group in Ledbury, the building will be put on the market at the end of July.
Mrs Lunn is still hopeful the new owners will allow her classes to meet there. But, whatever happens, she says she is determined to find somewhere to continue the long-established school. Mrs Lunn said of the present venue: "It's so ideal. I've had my ballet bars up from the beginning. If it's sold to the right person, perhaps we can stay." Mrs Lunn bought the dance school in the 1960s. Before then, it was The Grace Dovey School of Dancing.
The building will go on the market at the end of the summer term and Mrs Lunn is keen to secure permanent premises, either on the present site or elsewhere, before the start of the autumn term.

With the Dancing School in the St John's Ambulance building until 2003, and Elizabeth and her husband living in Southend House, (see below) the Dancing School seems to have an office in the Homend as this advert from the programme of the 1977 Carnival Procession shows: 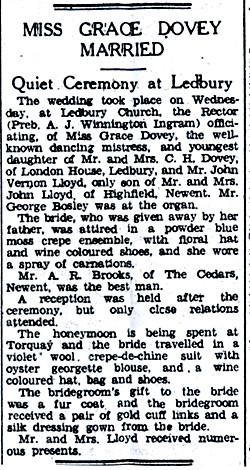 From the Ledbury Reporter
August 9th 1941.


Grace, now 40, married in 1941 and lived with her husband John in 'London House' High Street until her father, Charles, retired in about 1946.

In 1947 Grace, her husband John and her parents, Charles and Ellen, are living in Southend House. This is the same year that the Grace Dovey School of Dancing was formalized as a business, I doubt that was a coincidence.

Charles Dovey died on Mar 1st 1951, Grace and her husband stayed in Southend House until her mother, Ellen Dovey, died on January 3rd 1968 after which they moved to 'The Lilacs', (now renamed South Lodge) South Parade, a house they had built in the garden of Southend House.
Grace died on October 15th 1995 aged 94, her husband John Vernon on April 30th 2000 aged 90.
In her will, dated 1987, she leaves all her jewellery to her sister, Constance May Blenkiron, (who had predeceased her) with, apart from some charitable bequests, the rest to her husband. 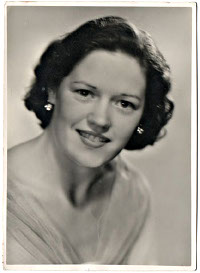 A well known local school of dancing is to change hands. When the Grace Davey School reopens after the Easter holidays on May 7, it will be under sole ownership of Miss Elizabeth Baker and, from then, will be known as the Elizabeth Baker Dance Studio.
During the past year while Miss Baker has been in partnership with Miss Dovey. she has concentrated more on ballroom dancing while Miss Dovey has devoted her attention to ballet teaching. Now Miss Baker will supervise both sections.
Daughter of Mrs H Baker and the late Mr Charles Baker of Park View, Southend, Miss Baker, who is already well known in Ledbury for her dancing successes. Started her career at the age of four years under her present partner and within a year appeared in no less than six scenes in the display which Miss Dovey presents annually.
After matriculating at the Ledbury Grammar School, she became the first Ledbury girl to study at the Sadler's Wells School (now the Royal Ballet School), where one of her friends was the now famous ballerina, Beryl Grey.
Miss Baker also studied with three famous Russian teachers, Vera Volkova, Anna Slenaskaya and Lydia Kyast, with whom she gained valuable experience through working with such famous dancers as Dame Margot Fonteyn, Moira Shearer, Beryl Grey and Robert Helpmann.
Her stage experience, invaluable to a teacher, was considerable, taking her all over the country in such productions as Ivor Novello's &#39Careless Rapture&#39, &#39The Wizard of Oz&#39, The Kyasht Ballet Company, The Ambassadors Ballet Company and many pantomimes.<br> Miss Baker had the good fortune to visit Norway, where she danced for eight weeks in a revue at the &#39Chat Noir&#39 theatre in Oslo<br> BALLROOM DANCING<br> Although the greater part of her professional work has been in ballet, Miss Baker is equally qualified in ballroom dancing which she taught at the Arthur Murray organisation, where her pupils particularly appreciated her work in the organising of cabarets in her spare time. She was later Dance Director of the Gordon School in Richmond.<br> Her pupils in Ledbury should benefit to a considerable extent from this experience as well as from her training with two former world champions, Frank Alback, examiner of the ATA, and Desmond Ellison, world champion of 1959 and examiner for the Imperial Society.<br> Subsequently, after passing her membership and being commended in theory and teaching, she was awarded two professional diplomas.<br> In spite of this considerable experience, Miss Baker is fully aware that a good dancing teacher never stops learning and she hopes to continue to gain much, not only from other dancers but also her own pupils. In this way, she says, she hopes to mantain the high standard for which the school is well known and to which she has already contributed.</blockquote> Her settled life changed dramtically in 1970/71 when at the age of 41 she married Robert Lunn a well known local comedian who deserves a page of his own.<br><br> They must have bought Southend House from Grace Dovey at this time as in 1971 she is living there, probably with her mother, now a widow.<br> Sadly her husband, Robert, died on October 30th 1994.<br> She stayed in Southend House until 1999 where she bred and showed griffon buxellois dogs, later moving to 36 South Parade by 2002, a house she named Bobenut.<br> She was quite successful with her dogs with Bobenut Mr McGregor and Bobenut Jemima winning the postgraduate classes for both dog and bitch in the griffon bruxellois section at Crufts.<br><br> <figure3> <img class=image8 alt="A Griffon Dog" src="griffon.jpg"><figcaption>A Griffon Bruxellois </figcaption></figure3><br><br> <ul> <li><a href=#Top>Back to Top</> </li> </ul> </div> </body> </html>