The Jones name is linked to the New Town Sub Post Office from its establishment in about 1908 to its closure in about 1997. Note that the property was called Enidville.
I can find no connection between the first Jones and the Jones family that followed so I am assuming that the continuity is pure coincidence. In any case the first was not there long.

What follows is all I can find out about the Jones family at this time.
I am hoping it will trigger a lot of memories and information or corrections which can be added as and when.

Although 20th century research of Ledbury would be very difficult without Tilley's Almanacks it only gives the initials and surname of a property's main resident and other sources have to be consulted to fill in the details.

Charles and Emily were married in Gloucester in 1910 and they had a daughter in Coventry in 1913 so must have moved away from Ledbury shortly after the 1911 census but they had established the PO.

The next available Tilley's in 1920 shows A. Jones is in Enidville and this remans the entry until 1947.
The 1939 Register gives:
living in ' The Stores ' Victoria Road:

Arthur John Jones was born in Fownhope on January 6th 1877. A stonemason and bricklayer he married Elizabeth Thomas from Powick in 1899. They settled in Withington where they had:

This Jones family are in Enidville from 1914 and were to remain there until 2016.

I am only following Ledbury events and:
(1) James Edward Jones married Rose Eleanor Hyde, whose father was Henry John (Hyde), a bricklayer, in Little Marcle on Sep 30th 1933, and settled in No 30 Oatleys Crescent.
They had:
Arthur J in 1935
James Edward in 1938
William T in 1942

Arthur died in 1949 leaving Elizabeth as Head of Household and this is reflected in Tilley's entry for 1950 which lists:

Elizabeth died in 1953 but the Jones name continues as Tilley's tells us that in 1954 a Miss Jones is in the PO.

Miss Jones, the only name by which she was known locally, was Elsie May b 1901, daughter of Arthur and Elizabeth, and sister to James Edward, see later. She never married and later lived a few doors up Victoria Road from the PO in a bungalow called Penybryn.

She disappears from Tilley's in 1982 and from that date no occupant is shown in the PO athough James Jones is still in Enidville. and 1989 is the last time it is referred to as the Sub P.O.

James Edward Jones, senior, must have set up as a builder in 1946 with his son, also James Edward popularly known as Jimmie. J E Jones is listed by Tilley's as head of household from 1955 to 1981 and he doubtless lived there using the workshops at the back for his building business but it seems it was probably still his sister Elsie who was running the PO.
He died in June 1997.
In 1963 James Edward junior moved to Tillers's Green, Dymock and from 1997 the building business was run from there. 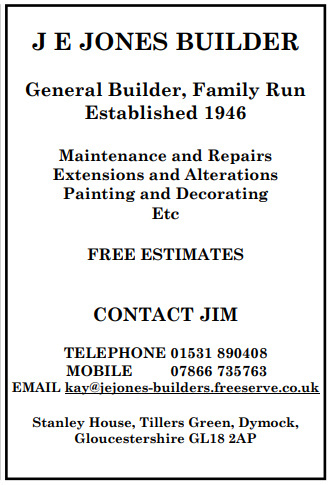