The land on which South Parade exists was a part of the estate of Jane Seward who lived in what is now The Yews. For more on her see No 23 Southend.
She died in 1828 and the property was sold by auction, one lot being 'All those five acres of extremely Rich and Productive Meadow Land having a considerable frontage on the Turnpike Road and most desirably situated for building'.
The Turnpike Road, referred to, is the Southend and the considerable frontage extended from Southend House to Gloucester House.
Bought by Mr Juckes, a builder, who built himself a house on the corner of what became South Parade ie No 39 Southend (qv) and 4 houses at the bottom of the Parade which were ready for occupation by 1829.

From the Hereford Journal November 4th 1829 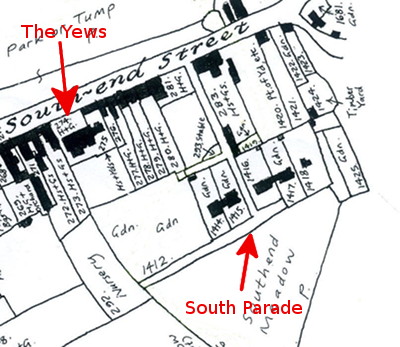 The Yews in the Southend is where Jane Seward, the previous owner of the land, lived.

Plot 283 is still owned by William Juckes the builder.
By this time a fifth, detached house has been built (Plot No 1418) and the associated schedule tells us who the landowners were:


And in the 1841 census “the Heads of Households” are: A legal case held at the Herefordshire Lent Quarter Assizes in 1851 tells us much about South Parade and the drainage arrangements for the Southend in the 1850s.
The sewage from the houses in the bottom half of the Southend was collected in an open drain which then ran across Pound Meadow to several catchpits.
The Biddulph family owned Pound Meadow and used the sewage collected in the catchpits to spread over their land.
Charles Chamberlain, who lived in Rutland Lodge, South Parade, complained to Robert Biddulph about the smell arising from these and getting little satisfaction he reported the matter to the Inspector of Nuisances, an Officer employed by the parish to inspect for offensive conditions and a date for the inspection was set.
Before this date a large amount of fresh water was released from a lake in Upper Hall, which finished up flushing the drain carrying the sewage. Unsurprisingly no nuisance was found.
Mr Chamberlain accused Mr Biddulph of resorting to trickery in a letter published in The Hereford Times of September 14th 1850.
Needless to say Mr Biddulph was not too pleased about this slur on his character and decided to sue for libel.
The case went to Court in March 1851, with Mr Biddulph as the plaintiff and Mr Chamberlain the defendant, and as all matters had to be explained to the Jury a useful map was drawn up and witnesses questioned.

The map shows the ditch, the catchpits and who was living in the five houses at the bottom of South Parade when the map was drawn in 1850 giving us a convenient list using the house names as they are known today.

Out of interest there was no main drainage in Ledbury until 1900!

These were the only houses in South Parade in 1851 and this and the Tithe map can be used as a foundation for the history of each house.
To include all the house histories on this page would make it far too long so I have given them separate pages which you can access below.
Sometime between 1861 and 1871 a further house was built on Plot 1412, now known as The Willows, and this is included in the histories.