A Grade 2* Listed Building.
Circa 1600. 3 storeys and cellar. 2 gables on east and north fronts. Timber-framed. Top floor projects on both north and east fronts on posts and brackets against the storey below. On 1st floor are remains of an oriel window. On the north front this floor overhangs the pavement and is supported on 5 wooden posts, tapering downwards, on stone bases and having bracketed heads and moulded bases. They support a moulded bressummer. East front 2 windows, 1st floor 2 3-light oriels slightly canted on carved brackets, 2nd floor 2 small casements, ground floor Victorian projecting shop front with narrow fascia and cornice with curved ends. North front windows blocked but for casement in gable. Tiled roof. 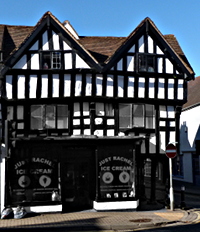 Popularly known as the House on Stilts, the stilts are actually in New Street.

A shoe shop from about 1860 to 1959 under the Hamptons name until 1920 and the Watkins name until 1959.
Later becoming a Ladies hair stylist under various names, Lesley's, Butterfly and Angela's and associated with the Four Seasons Fashion House.
It is now the Just Rachel ice cream parlour. 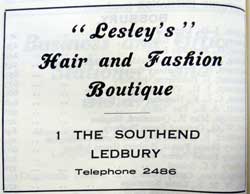 in 1861 she is in the High Street in what is now Hay Wines, still a Draper and Milliner. Still in business in 1871 in the High Street as head of household at the age of 69, she is now joined by her son Daniel, his wife Elizabeth and three grandchildren, Stanley b 1866, Ethel b 1868 and Ida Mary b 1870 all born in Ledbury .
Another grandson Howard G Bacon, (mother Peternella Badcock) b 1862 in Camberwell Surrey, 2 apprentices and a servant complete the household. By 1881 Daniel is head of household, Ann died in 1887 and is buried in the cemetery.
The epitaph reads:


In loving memory of Ann widow of the late James Badcock who sweetly fell asleep March 28 1887 in the 84th year of her age.

William Hampton (1861) Born in 1817 in Gloucester he married Esther Hinton, born 1818, in Tewkesbury in 1840. Their first son, William, also described as a shoemaker in 1861, was born there in 1842, as were John Henry in 1844 and Sarah Ann in 1849.
His last child Elizabeth Anne was born in Ledbury in 1860. He retired before 1891 and moved further down the Southend leaving his son, William, in the shop. William, senior, and Esther are buried in the Cemetery:

William and Eliza are buried in the Cemetery:

Watkins W. T. was manager of a boot shop in the High St in 1901, his son Reginald had just been born. In 1939 the family are in Clifton House, Bank Crescent. William is described as Boot and Shoe Retailer.