The George Inn (Part). A Grade 2 listed building
C18. Brick. Tiled hipped roof. 3 storeys. 2:3:2 windows. 2 shallow projecting wings and a recessed centre piece. Each wing has dentil blocks below eaves, and below these a dentilled pediment above 1st floor on a cornice. The recessed centre piece has also a pediment with a similar dentilled cornice, which thus runs the whole length of the front. The centre piece is lower than the wings. Sashes some with thick glazing bars, ground and 1st floor keyblocked arches. Centre ground and 1st floor 2-storeyed canted bay of sashes with glazing bars, with fielded panel door to left with rectangular fanlight and moulded hood on shaped brackets. No 10 has early C20 shop front with fascia and cornice on brackets, and round-headed passage on right with keyblock.

In 1781 the George Inn, possibly new, was offered to rent with twenty acres of ground, which probably included frontage to Southend as far as No 19 the cottage of the same period.
In the early 1800s it was owned by the Taylor family who also owned the Feathers. Various landlords followed with short tenancies, with Joseph Antonio perhaps the most colourful from 1845 to 1861.
Perhaps too big for its own good it was divided in two in about 1862.
The building work may have been done by Robert Preece whose family owned No 10 from 1871 to 1974.

Between 1861 and 1863 the George Inn was divided into two properties.

The first reference to The George I have found is this from the Hereford Journal of September 6th 1781:

To be Let, and entered upon at Candlemas next that large commodious and well accustomed Inn, called The George, in Ledbury with or without twenty acres of meadow ground, eight of which are orcharding.

Inquire of Mrs Powles, at the Nether Hall Ledbury.

From the following advert of 1826 it seems there was a period when it was split up, probably as it is today, and then recombined as an Inn.
From the Worcester Journal November 16th 1826


Ledbury Herefordshire
TO BE LET
And entered upon immediately.

A COMMODIOUS, Well, and Substantial built MANSION HOUSE, Coach Houses, Stabling for twenty eight Horses,and other outbuildings, with a Walled Garden, situate in the Market Town of Ledbury in the county of Hereford, in which there is at present but one Posting Inn.
The House was formerly let as an Inn, called THE GEORGE INN, but for some years has been occupied as a Gentleman's Residence. It is now fitted up and licensed for an Inn and consists at present of three good front and one back Parlours, a Bar, Kitchen, Brewhouse and Larder and nine excellent Bedrooms; but in the Month of June next two additional Parlours, two Kitchens, six Bedrooms and outbuildings can be had by opening a communication with the adjoining House which at the time the Premises were let as an Inn formed part thereof.
The Premises are well adapted for Posting being situate on the main Road between Hereford and Worcester, distant 15 miles from each, 15 miles from Gloucester, 20 miles from Cheltenham, to which there is an excellent Road over the Haw Bridge, 14 miles from Tewkesbury, to which there is an excellent new Road by Eastnor Castle the seat of Earl Somers, 8 miles from Newent, 13 miles from Ross, 14 miles from Bromyard and 6 miles from Malvern Wells.
For a view of the Premises, and for further particulars, apply to Mr Brydges, Surgeon, or Mr Holrook, Solicitor, Ledbury. All letters must be post paid.
Ledbury Nov 10th 1826

In 1839 the Tithe map shows Eliza Taylor as the owner.


The Taylor family owned both the George and the Feathers.

Not the Southend but included here for interest.

From the Hereford Journal 25th November 1840.

MARRIAGES. Nov 19 at Ledbury by the Rev. James Watts, vicar, John Carter of Malvern Wells, to Mrs Eliza Taylor, of the Feathers Hotel, Ledbury, and relict of the late Mr. Luke Taylor, of that town.

A report in the Hereford Journal September 29th 1841 says:

... was held at the Feathers Hotel and the viands and wines provided by mine host and hostess, Mr. and Mrs. Carter, were excellent.

An advertisement in the Hereford Journal of Dec 22nd 1841 shows the next landlord:

FEATHERS HOTEL and POSTING HOUSE. Francis Henry Deakins begs most respectfully to inform the Nobility, Gentry, Agricultural and Commercial Gentlemen and his Friends generally, that he has taken to and entered upon the above Hotel......

The Carters seemed to retire, later censuses show them as Independent, they ended up in Gloucester where Eliza died in 1878.

Sometime before 1827 Richard Cooper was the landlord of the George Inn as these two reports show:
From the Hereford Journal of May 16th 1827.

Whereas a Commission of Bankrupt is awarded and issued forth against Richard Cooper, of the Town of Ledbury, in the County of Hereford, Innkeeper, Dealer and Chapman, and he being declared a Bankrupt.....

The Court for the relief of Insolvent Debtors, on the 29th day of April, 1836, upon the filing of the Petition and Schedule of RICHARD COOPER, formerly of the George Inn, Ledbury, Herefordshire, Licensed Victualler and Stage Coach Proprietor afterwards of Ledbury aforesaid Stage Coach Proprietor; and late of the Red Lion, Butcher Hall Lane, Newgate Street in the City of London.....

By 1834 John Williams is in the George as this report in the Hereford Journal of 22nd January 1834 shows:


On Friday evening an accident occurred at Ledbury, attended with the loss of a valuable mare belonging to Mr John Williams, of the George Inn. It appears that the Groom was sent out to exercise the mare; after a short time she ran away with him at full speed, nearly the full distance to Dymock (four miles), where she was fortunately stopped without accident; but on her return to and near Ledbury, the Groom was silly enough to mount her again (it being then about eight o'clock P.M. And quite dark), she again started off and unfortunately came into contact with the shaft of a cart, which penetrated her chest and caused nearly instant death.

He died in 1845 from Worcester Journal October 30th 1845:
Oct 25th at his residence in New Street, Mr John Williams, formerly the well known and respected landlord of the George Inn, Southend Street, in that town.
For more on what happened to his wife Mary and the children see No 20.

A change of landlords is shown from this advert in the Hereford Times of May 6th 1843: 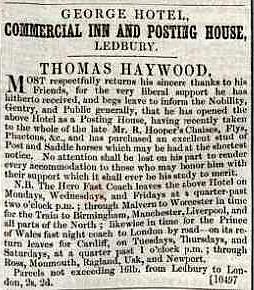 
Thomas Haywood didn't last long as in 1845 Joseph Antonio has taken over.


For more on Joseph Antonio see the 'Potted Biography' page. 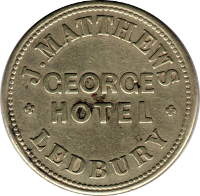 By 1861 there is a new landlord James Matthews. He has various staff including a barmaid and waitress serving seven boarders. Tokens were often issued by landlords, an example is shown here.
For more on James see No 5, the Royal Oak.

The County Court came under the jurisdiction of George Henry Piper.
George Piper (1820-1897) was living in Southend Street in 1841 as an articled clerk. The son of Edmund J Piper of Eggleton, Herefordshire, he is in Eggleton with his family in 1851 and in 1861 he is in No 15 Southend Street as an Attorney and Solicitor.

When part of The George became available between 1861 and 1863 (see Robert Preece text in No 10) he moved to No 11 and was to stay there for the rest of his life.


LEDBURY
The Lord Chancellor has been pleased to appoint George Harry Piper, of Ledbury, in the county of Hereford, gentleman, a commissioner to administer oaths in Chancery in England.

An Obituary in the Gloucester Citizen of 27th August 1897 records:


On Thursday evening Mr George Henry Piper a well known Herefordshire solicitor, died at his residence, Court House, Ledbury, after a short illness, the cause of death being Bright's disease. The deceased, who was 78 years of age, has practised in Ledbury over half a century, and for the last 30 years was Registrar of the Ledbury County Court. He was a prominent Freemason, a fellow of the Royal Geographical Society, and a well known archaeologist. He had held the office of president to the Malvern Field Club and the Woolhope Field Club, and local hon. secretary to the Royal Agricultural Benevolent Instituion. Deceased was unmarried.


The two daughters carried on the School after his death and are there in 1939 with Jean M Unsworth, b 1916, also a schoolteacher. Dorothy died in Worcester (District) in 1961 and Agnes died in Hereford (District) in 1974.

By 1947, a Miss E F Rowley had taken over the school. Probably Eileen Frances Rowley, b 1908, the daughter of Thomas William Rowley a headteacher at St Weonards Hereford.


The building to the rear of No 11 was once part of the George Inn.

This plan shows the location, set back from No 11.

Comparing this with the Tithe Map on the Introduction page shows that it included Plot 267, (No 12) a property demolished in the early C20.

From about 1940 until 2003 it was the headquarters of the St John's Ambulance Headquarters, they kept an ambulance there. In later years it included a ballet school.

St. John's Ambulance moved out shortly after as this newspaper report shows:
From the Hereford Times April 2005.

The Royal Hall in the Southend, Ledbury, has a new owner and a fresh lease of life following a £ 200,000 investment by Neat Feet dancing. The Royal Hall at the Royal Oak already has a sprung floor and new owner, dance tutor Susan Melvin, of South Parade, has installed dance bars, disabled access and changing rooms. She said: "It is a big investment but when the St John Ambulance went on the market 18 months ago and we had to move out of there, Ian Martin of The Royal Oak was the only one to offer us a lifeline.” The dance tutor, who has been teaching for nine years, said the existing sprung floor was a big selling point because it limits injuries to the feet, ankles and backs of dancers. The floor has been cleaned and beer stains and other marks scrubbed away. Mrs Melvin says she will not rule out hiring the hall for functions, providing proper care is taken of the floor. In recent years, the venue has hosted poetry cabaret nights during the annual Ledbury Poetry Festival and has also been a venue for wedding receptions and other events At present, ballet and tap will be taught there but other styles of dance could be introduced.