Built as a Charity school around 1839, and surprisingly unlisted.
Presumably the whole building was used for this purpose initially but sometime before 1871 the right hand section became seperate accomodation using the right hand door, which is now No 13.
There is no No 14 today but the school continued until about 1910 using the left hand door as access to both the school and the teacher's accomodation ie The school house.
For more on this see bottom of page.


Taking on a new lease of life in 1910 as a School of Domestic Economy it became a Craft Gallery in 1971.

Now the office of DFLegal Solicitors.

This is not the place to record the full history of the early school.

Nevertheless little seems to be known about it, here is some information starting with a newspaper report.

Devised in 1706, bequeaths the various sums of &pound300, &pound150 and &pound30 arising out of land. There are two houses in Southend street, one of which is occupied as the school house and mistress’s residence, and the other is rented by Mr T Bibbs as yearly tenant at &pound10. The rest of the property consists of an orchard, now let at &pound10 a year, five cottages at &pound4 and one at &pound3. There are also rent charges amounting to &pound7 per annum. The school is attended only by 30 girls, 24 of whom are on the foundation, and the remaining six educated by Brydges’s charity. The scholars are charged 1d a week each; twenty four are nominated jointly by Robert Biddulph Esq. And the six by the Master of the Hospital, the Vicar and Mr Biddulph. The entire income of the school is about &pound98 a year,including school pence. The mistress receives a salary of &pound30. Four tons of coals per annum are supplied to the school at an average cost of &pound5 and bonnets and cloaks are given to the children at a similar cost. The school was built in 1839, at a cost of &pound186, borrowed at the banker’s, and paid off as the surplus rents permitted. There are two gifts quoted under the head of this charity. The first is:

&pound4 per annum, demised 1758 (in augmentation of &pound4 12s) given to the schoolmaster under the will of Elizabeth Hall, for instructing eight poor children of both sexes. This is always carried to the account of the original charity.

besides giving various sums, for distribution among the poor of Ledbury, devised £ 1000 for maintaining a school, the teaching poor children to read, and instructing them in religious duties. This sum was afterwards reduced by the Court or Chancery, who attached this bequest to Miss Hall’s school, adding six to the twenty four before instructed there,for whose instruction the dividends arising from the remaining sum were to be devoted.

Some records are available in the Hereford Archive and Record Centre, here are a few quotations.

An entry in the Register shows that John Gurney, aged 7, was admitted to the school on July 10th 1805 and sent to the Writing School on 14th August 1806. A quick learner evidently!

Both Schools were consolidated with the National Schools when the latter were first established in the year 1818.

About &pound150 having been expended on newly fronting and otherwise repairing this and the Girls’ School House in the year 1839. This (The Boys’ School House) was let to Mr WILLIAM LOADE from 4th December 1839 at &pound14 per annum he paying all rates and taxes.

The other school seems to be much further down the Southend (to be confirmed).

The school had its share of tragedy as a report in Jackson’s Oxford Journal of October 18 1868 records:


DIED Oct 5th, at Ledbury, after a short illness, much beloved, aged 21, Caroline, daughter of Mr.J Froud, of Wheatley, mistress of the Southend School, Ledbury.

She is buried in the cemetery, her epitaph records:

In loving memory of Caroline Enid Froude ... Mistress of the Southend School Ledbury she was suddenly called to her rest Oct 5th 1868 aged 21 years.

Note the different spelling of her surname. The death was registered in Tewkesbury as Froude .

Your committee have considered further letters from the Board Education and Lord Biddulph respecting the proposal to establish a Domestic Economy Centre at Elizabeth Hall's School, Ledbury, which Lord Biddulph as trustee is prepared rebuild and to let on a lease to the Education Committee at a peppercorn rent, if they will consent to maintain it. Your committee have appointed a special committee, consisting of Sir James Rankin, M.P., Colonel R. Prescott Decie, Mr Corner, Rev Preb Maddison Green, and Mr C. W. Stephens, to consider his proposal and report direct the Education Committee.


Further information on No 14:

Tilley's Almanack does not define all House numbers in this area. The 1910 edition has the following entry.

The 1910 survey confirms the names and gives more information on the properties. (You will have to read this with care as the listing is in reverse order to Tilley's.) 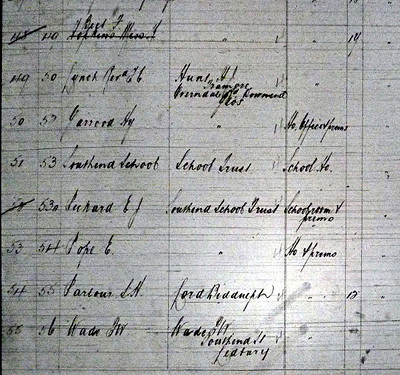 
The first word column shows the occupant, the second the owner and the third gives a description of the property.
From this and Tilley's it is clear that the left hand door, No 14, was the entrance to both the School House and the School.

Although living in school owned property the occupant of No 13 had nothing to do with the school and the 1901 census confirms this. Here is an extract: