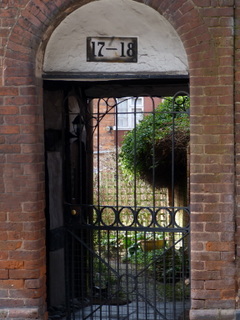 No 17 and 18 are behind No 19 and according to Hannah Russell's will dated 1849 were 'recently constructed'.

From Tithe Map Owned by William Russell* and occupied by Robert Ballard.

* For more on William Russell see No 20.

I cannot sort out the Head of Household in 1861. Transcriptions say it is Hannah Mussell, widow, 68, a Monthly Nurse born in Welland
I can find no such person. It is tempting to think it is Hannah Russell as in 1871, but the birthplace and the profession is wrong

1841 In 1841 Robert Ballard, 35, is in No 17 with his wife, Catherine, 20, and daughter Charlotte 5 months. (Next door in No 18 is his brother Philip Ballard, 40, with his wife Ellen 34. No 17 and 18 were 'recently constructed' according to Hannah Russell's will dated 1849 (see No 19) and it is tempting to think that the two brothers moved into new houses with their new brides.)
Robert married Catherine Marie Pedlingham, 1820-1900, in 1839 in Worcester (District) and they had Robert in 1839, Charlotte in 1841, Catherine Maria in 1842, Philip in 1845, John Spencer in 1856, Elizabeth in 1859 and Edith Augusta in 1864. They were living in the Southend when Philip was born in 1845 and in Bye Street when John Spencer was born in 1856, suggesting they moved between those dates.
Robert retired in 1855, an announcement in the Hereford Times of May 2nd 1855 advertises the sale of his 'Dwelling House, Timber Yard, Carpenters and Joiner shops, Sawpit house, Ware and store Houses, Stable and gig house, Counting House and Ironmongery Room and premises now in his occupation, situate in the Bye Street, Ledbury.' A Footnote Says:

ROBERT BALLARD. On retiring from his trade as a Builder, Timber and Slate Merchant, begs to return his thanks to his friends for the support and patronage he has received and to inform them that he will carry on the manufacture of Bricks, Culverts and Draining tiles and Draining pipes at his Yard in New Street Ledbury.

Life in the Southend was not without its hazards as this item in the Hereford Times of October 17h 1840 records:

NARROW AND PROVIDENTIAL ESCAPE.
On Tuesday the 8th instant as Mr Robert Ballard, builder, and Mr William Barker, schoolmaster, were standing conversing together in the Southend street, they had a narrow escape of being killed by a bullet, which was fired at a deer, in the park of John Biddulph Esq. which adjoins the street. The ball crossed the street, passing between the above named gentlemen, and within two inches of the head of the former, striking a house on the opposite side of the street with tremendous force, from which it rebounded back to the Park wall, rebounding from thence to the middle of the road, where it was afterwards picked up.

1891 Henry Dew 28 from Ledbury. Third child and second son of Thomas Dew and his wife Caroline nee Browning. Thomas was a master carpenter in Union Street in 1871 and in the Homend in 1881.

1901 Edward Ballard.
Edward, of course, was a relative of the Robert here in 1841. This is not the place to fully discuss the Ballard family dynasty but as we have Robert and Philip in 1841 and now Edward and another Robert here in 1901, here is a summary.

All the sons became well known business people in Ledbury. Philip and Robert are found here in No 17, Stephen needs no introducing being well known in the construction of the canal through Ledbury. Thomas is perhaps less well known although a competent artist.
He married Ann Edy in Ledbury on 28th October 1835. They had:

Thomas in 1836 in Church Lane
Charlotte in 1838 in Church Lane
John Edy in 1841 in Homend
Robert Henry in 1844 in Homend
Clarence Ann in 1847 in Homend
Father's Occupation always described as Artist.
Thomas died in 1853.

Robert Henry married Mary Brewer in Dec 1871 in Martley They had:

Edward Arthur married Lizzie Florence Lea in Gloucester in 1896.
They had Arthur Edward Thomas in Gloucester in 1896 and this is the family in No 17 in 1901. He is a builder as was Robert in the same house in 1841.
They later had Edith May in Ledbury in 1903 and Gertrude Phyllis in 1909 in Gloucester where they are in 1911 in Reservoir Road.