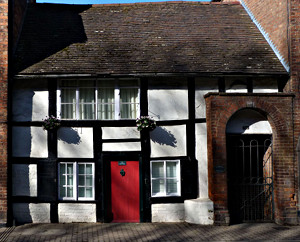 Built around 1600 this small cottage was the home of Hannah Russell (1753-1849) in the early nineteenth century and had probably belonged to the Russell family for many years.

From Tithe Map Owned by William Russell and occupied by Hannah Russell.

Mary now head of household in 1861, is with her daughter Sarah Ann 18, both earn their keep as needlewomen. Also in the household are lodgers Richard Brooke 22 and Henry Harbour, 25.
Sarah Ann Price married Henry Harbour, the lodger, in 1862. (Ellen Price was a witness).
From the Hereford Times Saturday May 31st 1862.


HARBOUR-PRICE May 29 at Ledbury church, by the Rev John Jackson, Mr Henry Harbour, to Sarah Ann, second daughter of the late Mr John Price, all of Ledbury.


Henry Harbour, was the second son of Henry and Ann Harbour .
Henry senior was a writing clerk working for the Canal Company in Ledbury in 1841, promoted to Wharfinger in Hereford by 1851 when Henry junior is with him.

In 1871 the head of household is now Sarah Ann Harbour 28 widow, dressmaker with her children Alfred, Henry and Ellen. Also there are Ellen Price, sister, 30 and Jane Price, sister, 26.