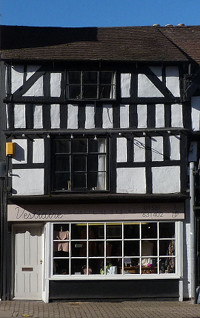 Various trades were carried out here through the nineteenth century, becoming a hairdressing salon in 1881.

From 1901 to 1958 the Morgan family were installed, initially as a Tobacconist and Gents Hairdressing establishment, later selling only tobacco products.

From 1958 to 1985 GR Birks continued the tobacconist trade and Four Seasons Fashions expanded here from No 1 for a few years.


Laying Manure on the Highway. Mrs Ann Murrell, residing in Southend street,in this town, was summoned by Superintendent Shead, for having on the 9th inst., emptied a quantity of night soil and filth in the street, to the annoyance of the public. Constable New proved the offence. Mrs Murrell stated that the person who brought the manure promised to haul it away early in the morning, but the carts were not sent till several hours after the appointed time. The Bench being satisfied that the offence was purely unintentional, fined the defendant 1s only and the costs.

Adam Clarke (1861) married Emma Clarke in Birmingham in 1841. A butcher in the High Street in 1844 when first son James was born and still there when daughter Ann was born in 1847. He had moved to the Southend by 1858 when his son Adam was born there. Moved to Colwall by 1871.


A Card
Joseph Hyde, Veterinary Surgeon
Begs to return his best thanks to the Gentlemen, Agriculturists, and Public generally, in the Counties of Hereford, Worcester and Gloucester, for their kind support of the last ten years and to inform them that at the solicitation of several gentlemen of the Ledbury Hunt he has been induced again to reside in Ledbury, where he trusts by unremitting attention to business, and moderate charges, to merit a continuance of that patronage which it has always been his anxious endeavour to merit. Ledbury, October 1846.

Thomas Morgan (1901) was born in 1831 to Joseph and Elizabeth of Wellington Heath. He married Elizabeth Tranter, from Nailsworth, in Worcester in 1850 and they had Alfred Thomas in 1850, Frederick John in 1852, Philip Henry in 1854, George Christopher in 1857, William Enoc in 1859, Austin Tranter in 1862 and Timothy Pearce in 1864.
A bootmaker in the Homend from at least 1861 to 1891 years, he is described in 1871 as a Master Boot and Shoemaker, Frederick John is with him as a Watchmakers Apprentice, (they live next door to Lucas Berkley a master watchmaker). Thomas died in 1908.