Occupied by the Merrick family for most of the nineteenth century, the Electoral Register for 1843 says it is owned by Thomas Thackwell of Church Street Monmouth with S. Merrick in occupation.


Although the name on the keystone above the door looks original I cannot find a printed reference to the name Park View until Tilley's 1908 Edition.

When Simon died in 1854 it is highly likely that Sophia (Thackwell) moved in to her sister's house, two widowed sisters supporting each other.
In the 1861 census Sophia is described as ‘Proprietor of houses’ suggesting she owns this house and perhaps one in Monmouth left her by Thomas Thackwell.
Sophia died on March 16th 1864.
But this is not the end of the family's association with No 28 see 1901 below.

Robert Stanley Searle, a banker's clerk in 1881, was born in South Autralia in 1859, his story is rather sad.
He married Ella Constance Vipan first in Kensington in Dec 1879 and secondly in Brighton in June 1880, suggesting they were of different faiths.

Robert, now a widower, never settles, and with son John, moves about in lodgings. In Bedford in 1891 and Kings Norton (Worcs) in 1901, always ‘ Living on own means’.
Son John, now a ‘Philatelic Dealer and Expert’ is on his own in Leicester in 1911 but sadly dies on March 1st 1913 aged just 32. Robert Stanley, perhaps with little to keep him in England, appears on the 1930 US Census in Santa Cruz, California.

As shown in the 1841 etc. notes, Sophia Merrick (1820-1904) married Charles Edwards ( 1812-1885) on April 15th 1841.
He died in 1885 and although the 1891 census says No 28 is uninhabited, the Electoral Register for 1891 shows Sophia in the Southend. The fact that she could easily move from High Street to the Southend when Charles died suggests to me that the house was in Merrick/Edwards ownership for most of the 19C. She died in 1904 and they are buried together in the cemetery with the following epitaph:

In loving memory of Charles Edwards who departed to be with Christ June 2nd 1885 aged 74 years. Also of Sophia his wife who fell asleep Feb 26th 1904 in her 84th year. And of beloved son William Henry who also fell asleep Oct 31st 1864 aged 18 years.

This Tom Woodward was born in 1872 in West Bromwich to Thomas and Elizabeth. 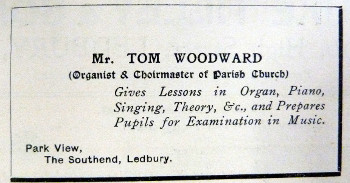 The 1881 census records show Thomas senior in Gloucester as a 'Teacher of Singing', Tom junior is of course a scholar.
In 1883 Tom was elected to a &#145choristership at Magdalen College, Oxford’ and by 1891 both he and his father are ‘Professors of Music’. Note he is always listed as Tom.
Having been appointed to be the Ledbury church organist and choirmaster, he marries Bessie Dallimore in Ledbury in 1896, his address given as Horse Lane, father given as Tom Woodward, Professor of Music.
A daughter Phyllis was born in Horse Lane in 1898 and another, Elfrida, in Oct 1901 in the High Street.
Sadly Bessie died in Ledbury in 1906, Tom remarried Clara Emily Smith in Paddington in 1909. In 1911 he is in No 28 with Clara, Phyllis and Elfrida.
He left Ledbury later in 1911 to take up a similar position in Bournemouth , his successor being F A Hobro from St Matthias' church Malvern Link.
He died in Brighton in 1937, Clara Emily died in London in 1938. Neither Phyllis or Elfrida married.

From the Gloucestershire Chronicle Jan 11th 1908:


MR. THOMAS WOODWARD. It is with much regret we record the death Mr Thos Woodward, Clarence House, Clarence street, Gloucester, which took place on Tuesday night. For some months past deceased had been unwell, but not sufficiently prevent him continuing his duties, and he occupied bis place in the Cathedral choir until the last Sunday in the old year. The deceased gentleman, however, practically took to his bed on the Monday following December 29th, the anniversary of his appointment as lay clerk. On Tuesday alarming symptoms manifested themselves, and his doctor decided that an operation was immediately necessary, but Mr Woodward never recovered consciousness after it, and passed away about ten o&#39clock the same evening.<br> Deceased was a native of West Bromwich, and in his early days was appointed to a lay-clerkship York Minster, which he relinquished in 1871 to come to Gloucester Cathedral. He was one of the best-known and respected musical men in the city, and. indeed, in musical circles all over the county, and since the death Mr. Abraham Thomas had been the oldest lay-clerk in the Cathedral choir. During his tenure of office he saw many changes in the personnel of the choir and the officials and dignitaries of the Mother Church. Deceased was a member of the Zetland Lodge of Freemasons, filling the office of organist of the Lodge for number of years.<br> Mr. Woodward, whose wife died in August last, leaves three sons, all well-known musicians: Mr. Tom Woodward, organist and choirmaster at Ledbury Parish Church ; Mr. Charles Woodward, lay clerk Lincoln Cathedral; and Mr. Josef Woodward, accomplished violinist, and also one daughter. </blockquote> <ul> <li><a href="Southend 27.html">Previous</a></li>&nbsp&nbsp&nbsp&nbsp&nbsp <li><a href=#Top>Back to Top</a></li>&nbsp&nbsp&nbsp&nbsp&nbsp <li><a href="Southend 29.html">Next</a></li> </ul> </body> </html>