A Grade 2 Listed Building (listed together with No 4).
C18. Stuccoed. Bands between floors. 3 storeys. let and 2nd floors, 6 sash windows with glazing bars. No 4 has a good early Cl9 shop front with pilasters, frieze and wide cornice, and large windows with glazing curving inwards to central glazed and panelled door with rectangular fanlight. No 3 has large modern shop front with high fascia. 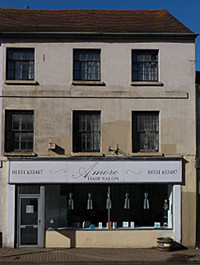 Note from the listing the building had a new shop front in the early 1800's.

From 1871 to 1939 the shop was a saddlers under various names: Parlour, Burrows, Clare and Ford.

With little call for saddles in 1940 it became a grocery store known as Melias & Co. and from 1977 it was the Ledbury Tackle Centre.
Now Amore Hair Salon. 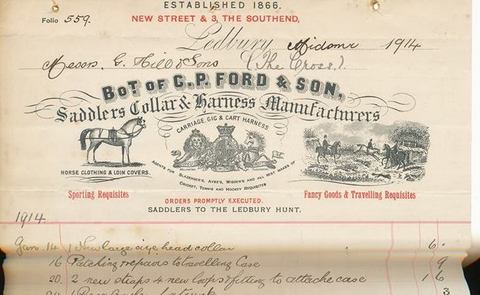 Dec 16th at Ledbury, aged 49, Thomas Oakley upholsterer and brush manufacturer. The deceased has for many years been a highly respectable tradesman in that town.

In 1911 both father and son are saddlers and employers.
Arthur Charles married Mary Jane Hill in 1907 they had Cicely Mary in 1908.
Settled in Belle Orchard in 1911 he is doubtless managing the shop in the Southend whilst Mr Whyld is living over the shop. Arthur died in 1948, Mary Jane in 1952 aged 67.