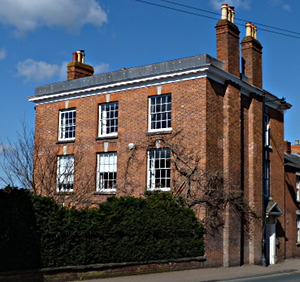 From Tithe Map Owned by Robert Slade (see No 22 for more on him). Ocupied by John Phillips.

A member of the main bank in Ledbury at that time:
From Hereford Times February 16th 1850

In Gloucester House in 1851 (from census) and in Park Cottage in April 1852 (Edward's baptism), he finally settled in Fairfields, Bromesberrow.
Described as a a two-storeyed 19th-century gentleman's residence on the Redmarley road, incorporating parts of an older timber-framed farmhouse, he probably had it built/renovated, before 1854 and where he spent the rest of his days.


On Monday the 4th inst. Was married, at Eastnor, in this county, by the Rev. Jos. Higgins, Rector, John Tanner, Esq, Surgeon, Ledbury, to Margaret, youngest daughter of Thos. Higgin, Esq. Of Gold Hill, of the former place.


January 17th at Ledbury, aged 34 years, Margaret, wife of John Tanner, Esq.; and on the 20th, aged 12 months, Francis Charles, youngest child of the above named.


October 18th, at Edinburgh, by the Rev. R. H. Stephenson, of St George's, John Tanner Esq., of Ledbury, to Anne Elizabeth, only daughter of William Henry Brydges, Esq., of Tarrington, all in this county.

Anne Elizabeth Brydges (1836-?) was the daughter of William Brydges of Lower Eastwood Tarrington.

Fortunately he was able to give his daughter away in 1862 at what must have been a society wedding in Ledbury.
From Hereford Journal 26th July 1862:

John's death gives us a description of the property at that time as the following advert in the Hereford Journal of September 29th 1866 shows:


LEDBURY HEREFORDSHIRE
DESIRABLE FREEHOLD RESIDENCE GLOUCESTER HOUSE, AND A VILLA RESIDENCE.
Mr Bentley will sell, by AUCTION, at the Feathers Hotel, in Ledbury, on Monday the 8th day of October, 1866, at three o&#39clock in the afternoon (under Trusts for sale contained in the will of the late John Tanner, Esq. M.D.)

Lot 1: All that modern-built RESIDENCE called Gloucester House, late in the proprietor's occupation, situate on the outskirts of the town Ledbury, having a south aspect, and comprising drawing room, dining room, breakfast room or library, butler's pantry, bathroom, with detached laundry and brewhouse, wood and coal sheds, piggery, and every other requisite accommodation, with a lawn and garden attached to the house; together with a COTTAGE or Lodge near thereto recently built, and a three stalled stable, two loose boxes, and a double coach house with hay and corn lofts, and servant's room over, erected within a few years at a considerable expense. The premises are well supplied with water.

Lot 2: An ORCHARD and KITCHEN GARDEN, with melon and cucumber pits, near to the above residence. The orchard was planted by the late proprietor with rare and valuable fruit trees and contains with the garden 1a. 1r. 12p.,* or thereabouts, and now let at the annual rent of &pound30.

John's son Robert presumably came to some arrangement with executors of the will as he is here in 1871 with his wife and children.
He married Harriette Emily Higgins, b 1841, of Globe House Bromesberrow on September 8th 1864 and they had a son, Robert John in July 1865, their second child, Margaret Emily was born on July 19th 1867 in Gloucester House so he was quickly established here after his father's death, and a third, Frances Elizabeth, in 1869 who died in the same year.

Robert evidently didn't enjoy the best of health as this extract from an advert in the Hereford Times shows:


On the 21st day of August 1877 Mr Bentley (who had sold the house in 1866) is selling all the household furniture of Gloucester House ' by direction of Dr Tanner who is ordered by his medical advisers to leave England'.
Apart from the furniture this includes an Alderney cow, a fat Shetland heifer, two black Berkshire pigs, perry and cider fruit in an orchard of about four acres...

Sadly it all ended in disaster.


THE SAD DEATH OF DR. TANNER.
When the news reached Ledbury, that Dr. Robert Tanner, lately of this place, and his son had been drowned in the fatal collision off Portland on Tuesday night, a feeling of grief spread through the whole community here. It is only a week or two since the doctor, who was going to New Zealand in the hope of recruiting his shattered health, was presented with a purse of £441, and an address as a mark of the respect with which he was held, and regret at parting with him. The sad and sudden ending of all his hopes, by this awful disaster, is keenly felt here by those who knew him well. The Dr. was 50 years of age and his son 18.

There is a full report on the above collision in The Times of September 13th, too long to reproduce here but:
From The Graphic September 15th 1877:


FATAL COLLISION IN THE CHANNEL: A terrible collision took place on Tuesday night off Portland between the Avalanche, an emigrant ship from London to New Zealand,with about 100 persons on board, passengers and crew, and the Forest, a ballast laden ship,belonging to Windsor, Nova Scotia. The Avalanche, an iron vessel, foundered immediately and it is thought that all her passengers and crew except three are drowned ..........

The disaster is commemorated in this Portland Church window.

This William Masefield was the uncle of John Masefield, the poet.
Born in 1841 he married Katherine Eliza Whatley, a clergyman's daughter from Aston Ingham in 1877, they had no children.
In 1891 they are in the Priory, off the Worcester Road. For more on the Masefields click here.
He died on May 29th 1906 and Katherine on 7th June 1927. They are buried in the cemetery.

After all that drama it is a relief to find only Alfred Greening a stable boy (Domestic) b 1876 in Eckington and Tryphosa Carpenter, Cook (Domestic) born 1869 in Cliffords Mesne here.
The main occupant was Penelope Whatley, sister of Katherine Whatley, wife of William Masefield as above, Penelope was in a boarding house in Cheltenham on the 1891 census day leaving just her servants in charge. She later had Southmead House built just across Mabel's Furlong. See Southmead page for more on her.
Tryphena Carpenter married Thomas Davis, a bricklayer, in 1894 in Ledbury. They settled in Bridge Street and had Ann in 1895, Giles in 1897, Denzil in 1899 and Percy in 1900 and five more before 1911!

The household consists of Emily I Roberts, widow b 1829, Alice E Roberts, single, daughter, b 1858 and Georgina F Brace, daughter, widow, b 1852 all born in Ireland, three servants were needed to support them.
Of little interest to Ledbury except for the fact that Emily Isabella died in Ledbury in 1907 making the property available for Dr McKean Harrison who was here from 1908 to 1920. (By 1908 Alice Emily Ussher Roberts is in Ankerdine House, South Parade.)

James McKean Harrison b County Down Ireland in 1867 is in Ledbury in 1901 as a Surgeon, on his own in a boarding house in New Street probably newly arrived and yet to set himself up properly.
When Gloucester House became available in 1907 he must have promptly moved in as he is here in 1911 with his sister Maud b 1865 Ireland. (Is it just coincidence that the Roberts and Harrison families came from Ireland?). He married Caroline Reiss in Donnington in September 1912, with her father conducting the ceremony.
Born in Cleobury Mortimer in 1877 she was the daughter of Frederick W Reiss the rector of Donnington from 1908 to 1914.
They had one son, Denis Hugh, on February 4th 1914 who only lived three days and sadly conducting the service for his grandson in Donnington on February 27th. was the last burial performed here by the Rev. Reiss.

A Snippet:
As the Ledbury Medical Officer of Health he reported on January 8th 1910 in the Hereford Times that there had been registered in the urban district during the past year 69 births, 39 boys and 30 girls of which seven were illegitimate ...

By 1922 James and Caroline are in 'The Orchard' South Parade, where they remain until 1937, now 70 he probably retired.
Tilleys Almanck states that Drs. Harrison and McKean are both in Gloucester House from 1908 until sometime before 1921.
Using No 2 Willow Terrace (No 43 Southend) as a joint surgery with Dr McKean from 1910 until 1929 and then until 1937 in No 16 Southend they must have had a close relationship.
Dr Harrison later lived in The Orchard South Parade and Dr McKean in Southend No 23, The Yews.
Dr Harrison's full name was James McKean Harrison it is tempting to think there is some familial connection there but with Dr Harrison born in Ireland and Dr McKean born in Scotland it is too remote for me to sort out.