Always the Royal Oak I don't really need to add to this.

From Tilley's with an update by Rex Barron.

The Royal Oak has of course always been a public house. Most 'pubs' have a regular change of landlord and this is true of the Royal Oak in the twentieth century but just two Ledbury families cover most of the nineteenth so their story is of local interest.

William and Susannah retired at the age of 48 in 1849 and moved to No 16 Southend where they are in 1851 as 'Retired Innkeeper' they seemed to have no children.

Austin Butler, described as an Innkeeper and Gun Maker in 1851, took the licence when William retired, a notice in the Hereford Times of 11th August 1849 records the license transfer. He was only here a short while before moving next door. More on Austin in the next property. The Inn was up for sale by auction in 1854.
Taken by a Charles Clarke, the Oct 8th 1859 edition of the Hereford Times advertises:


CHARLES CLARKE Grateful for the liberal support during his time at the Lamb Inn, begs to inform the Public that he has TAKEN and ENTERED upon the ROYAL OAK, LEDBURY; and, by keeping good Articles with a strict attention to business, he hopes to merit a share of the public patronage.

He is there in 1861 with his wife Lucy. Not from Ledbury we move quickly on to the the next dynasty.

In 1851 James Matthews, b 1813 in Derbyshire is a grocer in Bye Street shown with wife Maria b Ledbury in 1815. Also in the household are William Load, b 1839, wife's son and Mary Ann, b 1842, wife's daughter both born in Ledbury.
Note the children are listed as the wife's. Their birth registrations do not give Mothers Maiden Name which suggests she was not married at the time.
There are unlikely to be two Maria Load's around in Bye Street Ledbury in the 1840s so it is probably she that was fined 9s in 1846 for assaulting Louisa Minton by throwing a bucket of water over her and striking her with a dirty mop. In June 1847 a Maria Load was fined 10s for having seven deficient weights.
This suggests it was her grocery business before her marriage to James he moved in and took over. I am suspicious of this 'marriage', I cannot find any reference to it! Despite these indiscretions she went on have a successful career as a publican.

Now Matthews of course, she is established with James in the George Hotel in 1861. No more children, listed her two children are listed as son and daughter in law to the head of household, James.
James died in 1865.
In March 1864 William Hanbury Hopkins married Mary Ann Loade Matthews, Maria's daughter, and a son Ernest Hambler (Hopkins) was born in December 1864, (a name to remember) a daughter Ada Blanche Piercy (Hopkins) was born in March 1872.
In 1871 Maria, now a widow, is Innkeeper at the Royal Oak with her daughter now Mary Ann Hopkins, son in law, William and Ernest, her grandson now 6. And again in 1881 with grandchildren Ernest now 16 and Ada 9. In the 1891 census Maria now 77 is in Victoria Rd with son William (Load) b 1839.
Maria died in June 1891.
Sometime before the census date she must have transferred the pub to Ernest as in the 1891 census, Ernest is Hotel Proprietor at The Royal Oak at the young age of 26, with a wife Ellen, nee Evans, whom he married in 1885. They had a daughter, Blanche Mary E in 1886, a son Ronald Hambler in 1896 and Ernest Hambler in 1900.

Ernest Hambler Hopkins, senior, was the man who added the Royal Hall to the Royal Oak.
From the Gloucestershire Chronicle Saturday February 15th 1896:

On Wednesday evening the Royal Hall at Ledbury which has recently been erected by Mr E. H. Hopkins, the proprietor of the Royal Oak Hotel was opened. In connection with the opening the Ledbury Fire Brigade held their annual public dinner in the building. The hall is 80ft long and 30ft wide, the height of the wall being 24 ft. 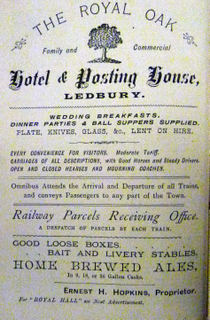 Ex Tilley's Almanack 1897
The hall was licensed for all manner of entertainment, comedy and pantomimes being very popular as It was really the only suitable hall in Ledbury for such events.
There are many references to the hall throughout the 1890s and the early part of the C20. Some important events of local interest are shown here.
On the 6th April 1899 Mr Rider Haggard (of King Solomon's Mines fame) drew a very large audience at the Royal Hall, Ledbury when he gave readings from his works. The proceeds, it was announced, were for Church purposes at Ledbury; the Rector of Ledbury (the Rev. Preb. C E Maddison-Green ) being Mr Rider Haggard's brother in law.
The Ledbury Fire Brigade always held their annual dinner in the hall, hardly surprising considering the landlord was in the Brigade, indeed the Captain for a number of years. At the event In March 1909 he gave a speech outlining the history of the Brigade which is worth noting as it may be the only such reference.


Captain Hopkins, who had an excellent reception, in replying to the toast, expressed the thanks of the brigade for the manner in which their efforts were appreciated. Proceeding, he traced the history of the Ledbury Fire Brigade from its earliest known days, the brigade, and was looked upon as a sort of &#148antiquity”. In 1848 the people of Ledbury, in order to keep up with the times, bought a manual engine with one delivery, and in 1875 an up-to-date engine (at that date) was purchased by the Lighting Inspectors at the great exhibition, while in 1872, the brigade, which they were now representing was started. In the year 1893 he (Capt. Hopkins) used his endeavours to get a steam fire engine, and so ready and liberal was the response on the part of the tradesmen, gentry, and others of the district, that he was able to raise sufficient funds for the steamer, which had done good service for 15 years (applause). During the past year there had been a number of fires, but he was very pleased to say that the members of the brigade when called upon had always turned out regularly and quickly (applause). There had been, during the year 52 station drills, and 12 other drills in connection with the steamer and hydrants besides other drills for the efficiency of the brigade. He was pleased to find they were at all times backed up by a generous Council, while it was entirely due to the Colwall Parish Council that he, as captain of the brigade, had an all-night telephone service with Colwall so that the brigade could be apprised of fire at Colwall at night. In conclusion, Capt Hopkins spoke of the readiness of the brigade to be at their post of duty, and assured the gathering that as long as he had the honour to command the brigade he would do his best as he had done in the past (applause).

The Stage — a specialist newspaper — runs the following advert on the 9th February 1922;

Programme of a play presented by Ledbury Grammar School at the Royal Hall in 1930 reproduced here courtesy of William Mutlow. 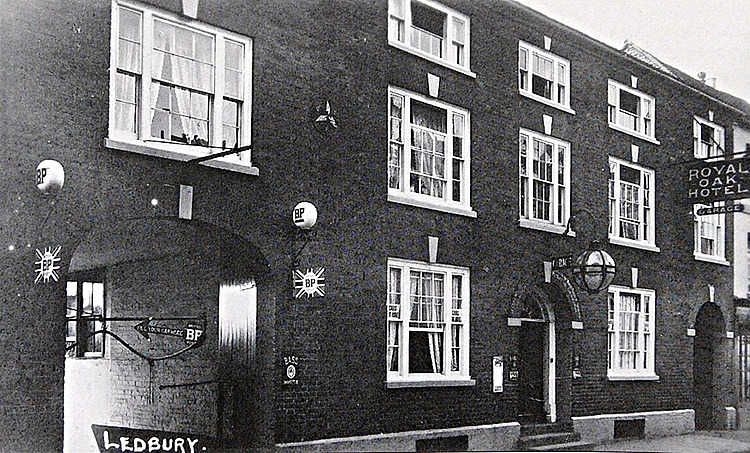 Bought by the Masons in 1936, the Royal Hall became The Masonic Hall and was used to billet troops during the war years including the Scots Guards.
The Royal Oak retained the right to use the Hall for entertainment purposes and ran Friday night dances through the 50's and 60's.
From the Hereford Times April 2005.

The Royal Hall in the Southend, Ledbury, has a new owner and a fresh lease of life following a £ 200,000 investment by Neat Feet dancing. The Royal Hall at the Royal Oak already has a sprung floor and new owner, dance tutor Susan Melvin, of South Parade, has installed dance bars, disabled access and changing rooms. She said: "It is a big investment but when the St John Ambulance went on the market 18 months ago and we had to move out of there, Ian Martin of The Royal Oak was the only one to offer us a lifeline.” The dance tutor, who has been teaching for nine years, said the existing sprung floor was a big selling point because it limits injuries to the feet, ankles and backs of dancers. The floor has been cleaned and beer stains and other marks scrubbed away. Mrs Melvin says she will not rule out hiring the hall for functions, providing proper care is taken of the floor. In recent years, the venue has hosted poetry cabaret nights during the annual Ledbury Poetry Festival and has also been a venue for wedding receptions and other events At present, ballet and tap will be taught there but other styles of dance could be introduced.