This view of the Southend in 1906 shows two large houses with tall chimneys standing each side of Mabel's Furlong, the house known as Southmead is on the far side, Gloucester House nearest.


And a view looking South out of town shows the front porch of Southmead. 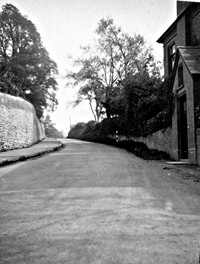 This map of 1813 shows that the only building in Mabel's Furlong at the time was in the corner of Cherry Orchard close to the Southend, this was to become Southmead.
The land coloured pink was owned by Philip John Miles of Upper Hall, all the rest was owned by the Biddulphs.


Note that Townend Hopyard is the location now of Townsend Cottage.


Very few old maps of Ledbury exist and I have to go next to the OS map of 1886. Not that it matters as little has changed except that Townsend Cottage is now shown.


The OS map above almost suggests that two premises were on the Southmead site but this Estate sale map of 1887 gives more detail, together with the schedule below, shows there was just one cottage with the whole eligible for Building purposes.

This map of 1900 shows that a significant building has indeed been built by this time with frontage onto the Southend as shown in the pictures at the top of the page. This is Southmead House.

Described as having two large reception rooms at the rear, large kitchen and dining room, downstairs bathroom with separate toilet with another room at the front corner.
A large porch led to the front doors which opened directly onto the Gloucester Road. Upstairs, approached by a large staircase there were five rooms and another bathroom.
A corridor on the right hand side led to a small flat adjoining the garage.


The only other new addition to this map from the 1813 map is that The Lodge, further down Mabel's Furlong, has now appeared.


In the 1891 census the enumerator goes down the Southend from the Top Cross. On reaching Mabel's Furlong he turns right and lists 3 households before returning to the Southend. The first would be Townsend Cottage, second, The Lodge and third the cottage in the Southmead location.
Here is George Palmer, of Ledbury, 73 Retired Gardener. He died here in 1897 in Mabel's Furlong in what must have been a very old cottage.

The 1901 census gives a totally different household. Penelope Whatley, 65, from Aston Ingham, and living on her own means, is there with Elsie Underwood from Ross 22, a domestic cook and Charles Shakesheff 14 from Ledbury a stable boy. From all this it seems likely that Southmead house was built between 1897 and 1901.

Penelope Ann Mary Whatley was the first daughter of the Rev Henry Lawson Whatley, rector of Clifford's Mesne.
He had married Anne Higgins, eldest daughter of Rev Joseph Higgins of Eastnor in 1833 and they had:


Katherine Eliza married William Masefield, the uncle and de facto guardian of the poet John Masefield, in 1877 but Penelope never married and after her mother died in 1870 and her father in 1873 she is with her brother Joseph in Malvern in 1881. He died in 1890 and in 1891 she is living in a boarding house in Cheltenham presumably just vsiting as in 1897 she can be found in Gloucester House Southend, the former residence of her sister, Katherine, and William Masefield.
With the Southmead site available after George Palmer died in that year she probably decided to establish a base of her own by building Southmead..
In 1911 she is being looked after by Clara Baylis, single, 46, from Worcester, a cook and Evelyn Baylis, single, 15, from Evesham as house maid.
She died in 1916 leaving about &pound4000 (&pound250,000 today) and her will leaves us in no doubt that she owned Southmead:
' I devise all that messuage or dwelling house situate in the Southend Ledbury known as "Southmead" now in my own occupation.....'
With probate granted in January 1917 the house was then sold The Rev J J Agar Ellis was born in 1863 in France. He married Gladys Marjorie Loxley, the daughter of Rev Arthur Smart Loxley, in Malvern Wells in 1903. They had Patricia Mary in 1904.
Rector in Offchurch Warwickshire in 1911 he moved to Ledbury soon after Penelope Whatley died:


WEDDINGS. ANTHONY-LOCKLEY.
At Ledbury Parish Church on September 21st the wedding took place very quietly (owing to recent bereavement in the bride's family) of Private Frank Anthonv, A.S.C. (M.T.) only son of Mrs. Anthony, of Offchurch, near Leamington. and Clara May Locklcy, daughter of the late George Lockley, also Offchurch. The bridegroom enlisted in August, 1914, and was home on short leave after serving for years in France and Salonika. The ceremony was performed by the Rev. W. Carnegy, rector of the parish, and the bride was given away by the Rev. J. J. Agar-Ellis. She was attended by one bridesmaid Miss Patricia Agar-Ellis. After the ceremony the wedding breakfast was held at Southmead. Ledbury, the residence of the Rev. and Mrs. Agar-Ellis, and later Private and Mrs. F. Anthony left for the honeymoon at Offchurch. Amongst the many presents received were three cheques, gold and tourmalin pendant, gold brooch, silver spoons, eider-down, table cloth, linen, candlesticks, brushes, rug, bedspread, pickle fork, gold ring and toilet covers. The bridegroom’s gift to the bridesmaid consisted of gold sleeve links.

So Patricia Mary Agar-Ellis was in Ledbury when she was about 14 and lived here most of her life.

MARRIAGE OF MR. L. R. SUMNER.
Ceremony at Ledbury.
LARGE CONGREGATION AT ST. MICHAEL'S CHURCH.
The marriage was solemnised on Thursday morning at St. Michael and All Angels' Church, Ledbury, of Mr. Lionel Randolph Coleridge Sumner, M.C., son of the late Mr. R. P. Sumner, and Mrs. Sumner, of Fair Mile Gloucester and Miss Patricia Mary Agar-Ellis, daughter of the Rev. J. J. and Mrs. Agar-Ellis, of Southmead, Ledbury.
The bride is Captain of the Ist Eastnor (Lady Somers' Own )Girl Guides, who were present in force. Mr. Sumner is a political officer in Nigeria.
The bride's father was formerly rector of Offchurch and since his retirement, some years ago. he has lived Ledbury. He is member of the Ledbury Board of Guardians.
The bells were rung as the bridal party entered the church. There was large congregation of relatives, friends, and wellwishers.
The officiating clergy were the Bishop of Truro (Dr. W. H. Frere) and Prebendary F. Carnegy, Rector of Ledbury, During the service the 67th Psalm was chanted and the hymn "The Pilgrim" was sung. The organist, Miss Masefield played several airs as the congregation assembled, and the Wedding March as the bridal party left the church.
The bride, who was given away by her father, wore a peach-coloured satin gown of mediaeval design, with long sleeves and pearl girdle. Her old Brussels lace veil was lent by her aunt, Mrs. Loxley. She carried a bouquet of roses, irises and white heather, the gift of the bridegroom. The bridesmaid was Miss Margery Bickham who wore a replica of the bride's dress with lace cap. After the ceremony a reception was held at The Steppes, lent by Dr. and Mrs. T. A. Jones. The bells continued to ring during the day. The honeymoon is taking the form of a motor-tour on the South Coast. The bride's travelling dress was of blue georgette over pink, and a blue straw hat, trimmed with pink roses on one side.

Something of her later life can be found in this article from The Kington Times of March 11th 1955:


NEW COUNTY COMMISSIONER OF GIRL GUIDES
Following a meeting of the Herefordshire Girl Guides' County Committee, it was announced that Finola, Lady Somers, will be retiring in July on the completion of her term of office, and that Mrs. L. Sumner. of Southmead. Ledbury, has been appointed as the new County Commissioner.
Mrs. Sumner is the daughter of Mrs. Agar-Ellis and the late Rev. J. J. Agar-Ellis. rector of Donnington. She was enrolled as a guide in the Ledbury Company in 1918 and later was appointed captain of the Eastnor Company.
In 1927 she married Mr. L. Sumner. an administrative officer in Nigeria. and Mrs. Sumner helped with guiding in the Western Provinces of that country.
On their return to England at the end of the war. Mrs. Sumner became Commissioner for Ledbury and later. Commissioner for the East Division of the county.

January 2nd (1960). Major Lionel Randolph Sumner, M.C., of The Becks, Wellington Heath, died at the age of 67. Having served for 24 years in the Nigerian Political Service until he retired in 1944, he returned to England and took up residence at Southmead in the Southend. Major Sumner was a churchwarden at Ledbury Parish Church for upwards of 10 years until he left the town to reside at Wellington Heath.

Mrs Sumner, now a local magistrate, remained at The Becks until 1977 after which she appears briefly in 25 Biddulph Way as Chairman of the Trefoil Guild, part of the Girl Guide Association. She then moved to a nursing home in Chichester where she died in 1981, aged 77.

From 1960 until 1963 F Hopkins lived in Southmead after which N J Arney still enjoyed the use of the whole house. By 1965 it was split into two apartments: Southmead Cottage I believe is 'the small flat adjoining the garage' given in the description above especially as the next and later records give Southmead Cottage in Mabel's Furlong .
Note that Mrs Sumner, despite living in Wellington Heath, has retained a presence in Ledbury until 1968.
This occupancy pattern lasts from 1970 to 1974 Note that this Mrs G Summers is not Mrs Sumners the former owner.

From 1975 to 1982 Southmead is listed but no occupancy shown suggesting it was empty, I get the feeling from this that Southmead was not a popular place to live, but there was some interest from 1983 to 1985 after which it is not even listed suggesting it was demolished.,

Places of Worship in Ledbury


Descending from a long line of Cowmeadows from the Forest of Dean, Derek Lowe Cowmeadow was born in 1928 in Chester to Raymond Cecil and Elsie (Sterry) (1896 ─ 1998).
Raymond (1896 ─ 1988) was an architect and preacher at Drybrook Methodist Church. He moved to Chester in 1927 and stayed there 19 years. Returning to Gloucestershire he settled in Churcham in 1946 with his son Derek, now 18.

At this point I would normally check out the Ledbury Reporter for 1985 for news of the demolition of Southmead but that will have to wait until the libraries reopen!