An article, in the Ledbury Reporter of June 19th 1926 tells the story of the early development of the Roman Catholic church in Ledbury.


Toward the end of 1900, it seemed to some of the Catholics of Ledbury that something should be done towards establishing once more a church in the town. Major Shaw,of Aylton Court, and Capt. O’Brien of Woodlands, applied to Bishop Hedley at Newport, and at his request, the Benedectine monks at Belmont Abbey undertook the work.
A house, 24 Homend, was rented and in a large upper room, carrying us inevitably back to the day of Pentecost, Catholic worship in Ledbury, after an interruption of 350 years was resumed. The little chapel was opened on Good Friday 1901.
Those too were hard days. Canon Wray, who took charge of the new venture, used to cycle over from Belmont on Saturday afternoon – motors were classed as dangerous explosives in those days, though they did not always go off – and after a strenuous weekend at Ledbury, returned on Monday morning to his work at Belmont of training young novices, and I can testify that this, too, was no sinecure, for I was one of those novices.
He was fortunate in finding in Ledbury a lady who not only saw that he had regular meals, did not sleep in damp sheets, and mothered him generally, but also played the organ for his services, and was able to speak sternly when occasion demanded. The spirit of self-sacrifice was in great evidence in those days.
Soon it became evident that some provision should be made for the instruction of the children, and many will remember Sister Rose and Sister Frances, who were found to volunteer their services and came from the Dominican Convent in London for three years.
In 1904 Father Edmund Begley was appointed to be the resident priest, and his first step was to remove from the chapel in the Homend, which had become uncomfortably crowded, to new quarters which had been leased in the Southend.
It is not necessary to dwell upon the attractive and popular personality of Father Frederick Lynch, or the genial figure of Father Patrick O’Keefe, for everyone in Ledbury knows them, and under them the Catholic Church in Ledbury was in the happy position, of having no history, it merely flourished.
In 1923, when motors had become more tractable, and exploded only when required to do so, the experiment was tried of having a priest who resided not at Ledbury, but in the large Presbytery of Bartestree, ten miles away, and thus Father Gregory Buisseret became the parish priest of Ledbury.
In 1925, when the lease taken by Father Begley fell in, the church in the Southend had in its turn become uncomfortably crowded, and temporary accommodation was found in the large sorting room of the Post Office which had just become vacant.
The next move in this wandering history will be taken on June 24th, when the Right Rev. Dr Mostyn, archbishop of Cardiff, is to open a new church near the South Parade.

The location of the Homend premises can be found using Tilleys Almanack for 1903. The entries are moving up the Homend and the chapel is just before the alley to Scattergood's Yard ie the house shown here. 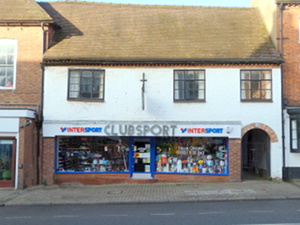 Building housing the church in 1901.


The opening to Scattergoods Yard is on the right.


Research into the 'new quarters leased in the Southend' shows it went to what is now called 'The Barn' behind No 16 Southend and this is an ideal opportunity to list the uses the Barn has had over the years.


The Rev C. E. Begley mentioned in the newspaper report moves with the church to No 16, (named in Tilleys as the 'Roman Catholic Presbytery'), and is there until 1908 when the Rev. Frederic Charles Lynch, b 1874, is in residence until 1921.
After 1921 the Rev. P. O'Keeffe is in the Presbytery until 1925 when the new church was opened on June 24th 1926 further down the Southend.

The new purpose built church was located in what is now Southend Mews.
The site was originally William Juckes builders yard and store see No 40 and the plot frontage can be clearly seen in this picture taken in 1906 with No 40 on the right and Willow Terrace on the left.
After the Juckes building dynasty ended in the 1890s the plot had various uses.

With the lease on the barn at No 16 ended it must have taken a while before the new church was ready as a temporary church in No 10 New Street was needed for the year 1926 and it was a further 7 years before No 40 became available as a Presbytery.
This list, assembled from Tilley's Almanack, shows the chronology for the period.

These two maps show the site in 1903 and 1926 with the builder's store/church arrowed.
With the profile the same on both maps it looks as if a new frontage was added to the existing building.

No 40 is known today as 'The Old Presbytery'.