Forgotten now, but in the C19 the Russell family of the Southend were responsible for various aspects of Ledbury for which they should be remembered.

Over two generations they left the following legacy:

They had had four children:

William in 1787.
Susanna in 1789. She married William Juckes in 1821 joining two of the main well respected artisan Ledbury families together. For more see Potted Biographies.
Thomas in 1791.
and Samuel in 1793. He died in 1795 'scalded' given as cause of death.

It is the story of William, and his son, also William, I am following here.

In 1826 Archdeacon Wetherall on a church inspection condemned the derelict church gates and the then Church Wardens, John Edy and Nathaniel Hemming, gave the contract for the new gates to William Russell who had taken over the smithy from his father.
The Church accounts for the following year shows payments to: (today's value in brackets). 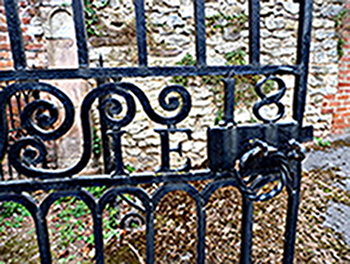 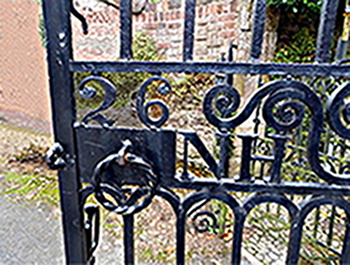 The work is a testimony to Victorian craftsmanship standing today as good as ever after nearly 200 years and will probably remain so for many years to come. The churchwardens had their initials and the date included in the ironwork although William didn't seem to get John Edy's initials right!
William died in 1845 aged 58.
From the Hereford Journal August 13th 1845:


July 28 at his residence, in Southend Street Ledbury, Mr William Russell, blacksmith. A man who, in life, was respected, esteemed, and beloved as universally as he was known, and, in death is as generally regretted. He was a kind and affectionate husband and father, a good neighbour, a sincere and faithful friend, and a truly honest man.

His mother, now 91, however is still alive in No 19 the Southend having outlived her sons. (More on Thomas later).
When she died in 1849, aged 95, she left everything to her first grandson, William, b 1820.
With both his father and grandfather being blacksmiths it would be customary for him to follow the family tradition but it was his brother, Henry, who carried on that business whilst William went down a very different route, making his fortune in London.
On the 1841 census, at the tender age of 21, he is one nine silk mercers at the premises of William Edginton in Piccadily, Westminster

Mercery (from French mercerie) initially referred to silk, linen, and fustian textiles imported to England in the 12th century. The term mercery later extended to goods made of these and the sellers of those goods.

and from the 1846 Electoral Register for Ledbury:

By 1849, when his grandmother died he is in 190 & 195 Regent Street where he is in the 1851 census unmarried as an assistant silk mercer.
This is the establishment of Lewis and Allenby and he is just one, but with big ambitions, of 7 assistants .
By 1861 he is a successful business man in his own right in partnership with Richard Allen as Silk Mercers in Old Bond St London employing 5 males and 2 females.
This business was very successful specialising in supplying dresses for the stage and the wealthy. Although there are frequent references to this company in the newspapers I cannot find any advertisement but the firm had evidently acquired something of a reputation.


A bit late for William to benefit from, the ultimate endorsment came in 1890 when the firm was asked to supply dresses to Princess Victoria of Prussia, granddaughter of our Queen Victoria, for her wedding to Prince Adolph a member of the complicated German royal family.

Now in a position to marry he somehow managed to meet up with Emma Williams of Ledbury whom he married in St Saviour's Church, Hampstead in 1866, no reference to this can be found in the newspapers.
Born in 1840, she was the daughter and only child of Richard Cropper Williams of Ledbury.
More about Richard Williams:


Richard Cropper Williams was born in Much Marcle to John and Mary in June 1795. He married Harriet Shipton in Ledbury in 1827, she died on Oct 19th 1830.
He remarried Margaret Hollings in Hereford in June 1838. They had just one child, Emma in May 1840.
Richard, Margaret and Emma are living in the High Street in 1861 in what was recently 'Nice Things' now 'Blandford Gifts'. Described as a Mercer and Draper when he died in 1865, he was buried in a family vault in the churchyard as befits a man of some standing. Margaret died in 1878 aged 80 and buried with Richard. His first wife, Harriet, may be there as well as she is referred to on the memorial.


Born then in 1840, Emma was 21 years William's junior and far too young to have caught his eye when he was in Ledbury as a young man, there must have been later contact between the families.
With no children from this union the couple are in Hampstead in 1871 and in a Lodging House in Hastings in 1881.
By now in his 60s he must have wished to retire to Ledbury and decided to build a new house at Woodlands in Parkway.

This was nearing completion in late 1887 as this advert from the Birmingham Daily Post of Dec 17th 1887 shows: 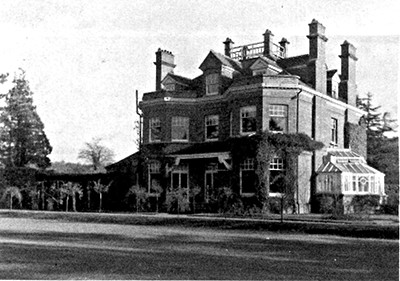 Woodlands, Parkway in the early C20.

From the Worcestershire Chronicle February 15th 1890:

LEDBURY
DEATH OF MR. WILLIAM RUSSELL.
Mr William Russell, head of the firm of Russell and Allen, of New Bond street, London, died after a very short illness at Woodlands, Ledbury, on Tuesday morning.
Mr Russell, who was 71 years of age, was a native of Ledbury, where he commenced life as a draper. In his early years he left for London, and being there successful he founded the famous drapery firm.
About two years ago he built Woodlands, a pretty little mansion just on the borders of his native town, where, with his wife, he came to reside last year.
Mr Russell was the originator of the scheme for the erection of the clock tower in Ledbury which is now being built as a memorial to the late Mrs. Barrett Browning, also a native of Ledbury.
To this he was an anonymous donor of £50.

He is buried in a corner of the Ledbury cemetery with a handsome memorial. 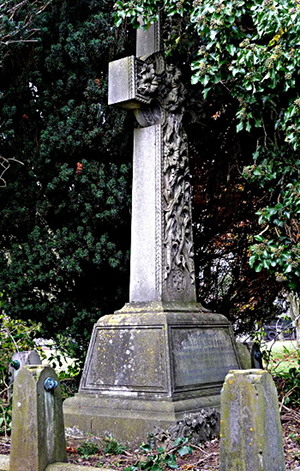 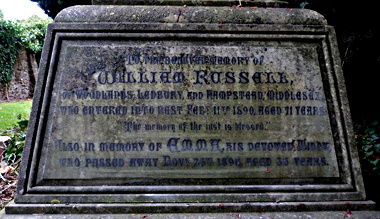 { To the beloved memory of
William Russell
of Woodlands Ledbury and Hampstead, Middlesex,
who entered into rest Feb 11th 1890 age 71 years.
"The Memory of the Just is Blessed"
Also in memory of Emma his devoted widow
who passed away Nov 25th 1896 aged 56 years.}


Emma must have had fond memories of Hampstead where she spent her early married years and wished their time there to be recorded by commissioning a window by the top craftsmen of the day:
From the Hampstead and Highgate Express March 7 1891

ST. SAVIOUR'S, SOUTH HAMPSTEAD. A new window of two lights with tracery over has lately been placed by Messrs. Clayton & Bell in the south chancel aisle of St. Saviour's Church, Eton-road, Haverstock-hill, given by Mrs. Russell, of Woodlands, Ledbury, in memory of her late husband. The subject is "he Salutation," or visit of St. Mary to her cousin Elizabeth, treated as couplet, Mary with Joseph being in one light and Elizabeth and Zacharias in the other. On a scroll over the head of the Blessed Virgin are the words, "My soul doth magnify the Lord," and to the two angels in the tracery openings above are given scrolls with the words, &#34Fear not, thy prayer is heard," and "His mercy is on them that fear Him." While at the base of the window the memorial inscription reads thus, "To the Glory of God and in ever loving memory of William Russell, late of this parish and Woodlands, Ledbury, Herefordshire, who died February 11th, 1890, this window is dedicated by his devoted widow, Emma Russell." This aisle being known " The Lady Chapel " the subject is appropriate to its site, and the idea is further the period when this branch of art was at its best.

His death must have shattered Emma, still only 50, but she carried on the charitable work initiated by William as the Gloucester Citizen of January 10th 1895 reports:

THE BARRETT BROWNING MEMORIAL AT LEDBURY.
...will be completed and opened by June next.
The building, which occupies an excellent corner site opposite the Market Hall, is of local stone and timber work......Mrs Russell, of Woodlands Ledbury, has presented a valuable clock with four dials to be placed in the handsome tower...

In her will, dated November 12th 1890, she left &pound20 to each of her servants except Elizabeth Ann Boggis.
She, my faithful friend and servant, was to receive &pound100 (&pound10,000 today) per annum for life.
Elizabeth Ann Boggis, born 1850 in Barnham, Suffolk, is with Emma and William when they are on holiday in Hastings in 1881 and is with Emma in Ledbury in 1891.


She must have been very close to Emma but unfortunately died at Woodlands on September 27th 1895 aged just 45. This must have been a double blow for Emma who, as shown, died a year later without bothering to alter her will.
Elizabeth is buried in the cemetery right next door to Emma and William.

{In loving memory of Elizabeth Boggis
[of Barnham Suffolk]
who died at Woodlands in this parish
27th September 1895
Aged 45 years.
Be thou faithful unto death and I will give
thee a Crown of Life}

&pound500 (&pound50,000) 'to putting in a memorial window in Ledbury Parish church or in such window and otherwise in the repair and improvement of such church.'

&pound5,000 (&pound500,000) 'to establishing, maintaining or carrying on a Middle Class Boys School at Ledbury'

This was opened in 1899 as the Hereford Times of April 22nd reports:

LEDBURY
"The Russell Middle Class Boy's Shool"
Prospectuses have been issued of 'The Russell Middle Class Boy's Shool' stating that the school will be situated at the Court House, Ledbury, and Mr F. W. Wade B.A. Scholar of Durham University, Associate of the College of Preceptors (and up to the present time Head Master of Ledbury Grammar School), will be the Head Master.
It will be remembered that the widow of the late Mr William Russell, of the Woodlands Ledbury, at her death bequeathed the sum of &pound5000 for the purpose of a middle class boy's school for the parishes of Ledbury Urban and Ledbury Rural, appointing Mr Jesse Garrood, of Ledbury,and two gentleman of London as trustees of the management of the fund. 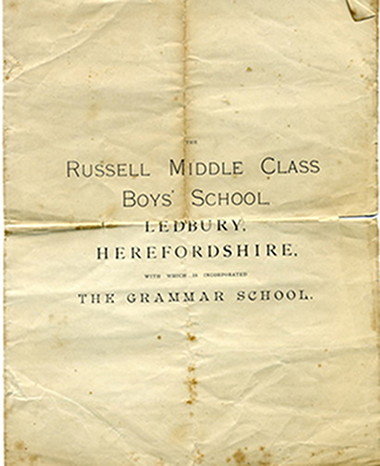 The school became known as The Court House School from 1926 to 1949 and then Ledbury Preparatory School until 1960 when it closed after 60 years teaching.
Frederick Wade was the first headmaster with his daughters in charge from 1924 when he died uhtil 1946. For more on the Wades see No 11 Southend Thomas Russell, brother to William senior discussed above had a short and undistinguished career.
A blacksmith like his father, he married Harrriet Mason in Ledbury on August 31st 1822.
With the Southend premises getting crowded Thomas moved his forge to New Street , Nearly opposite the old pike house lived a blacksmith named Thomas Russell who had his smithy there.(From Recollections of Ledbury' 1905 by George Wargent).
She died on May 27 1823 aged 34, her address given as Southend, her Mother in Law's house. Just 9 months after they married this leaves little doubt as to the cause of death, life was tough at that time.
A handsome stone in the churchyard records the event. Both her marriage and death notices show her name as Harriet but the stonemason records it as Harriot! 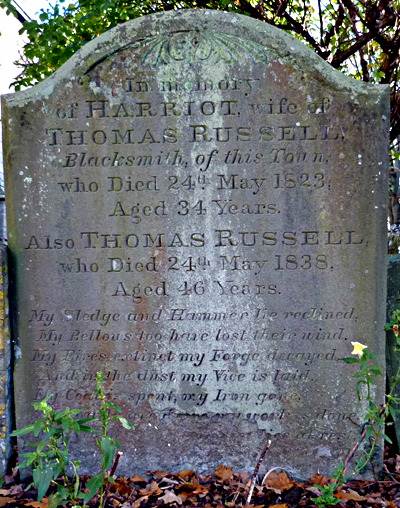 My sledge and hammer lie reclined,
My bellows too have lost their wind,
My fires extinct, my forge decayed,
And in the dust my vice is laid;
My coal is spent, my iron's gone,
My nails are drove, my work is done
My fire dried corpse now lies at rest
My soul, smoke like, is soaring to be blest.