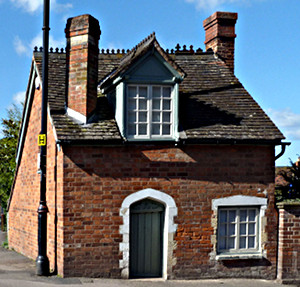 Establishing who was in the Toll House in the census years has not been easy.
I have assumed it is always next door to Gloucester House which is easily identified.
This certainly works in 1851 when Robert Gammage was a Gatekeeper and in 1891 when Ann Cale is there and fortunately stays there until Tilley's listing starts in 1903 when the cottage is identified.

From about 1976 there is not even a listing.

It is fortunate, for us, that this Simon died in 1829 his address at the time given as Southend so it is highly probable that the Chadwicks were in the Toll House from sometime before 1829 until after 1841.
Simon and Ann are together in the High St in 1851.
Simon (senior) died in 1858, Ann is in the Almshouses in 1861 with daughter Ann (b 1910) and died there in 1867.
Two of the girls lives can be followed:
Mary Ann Chadwick married Joseph Simmons in 1833 in Ledbuy and Mary Ann married William Humphriess in 1838. She was a laundress and he a gardener in Parkway. Woodlands perhaps?

1851
In 1851 Robert Gammage states he is a Tailor and Gate Keeper. Born in York in 1801 he is married to Ann born in Ledbury or Munsley. No children recorded. He died in 1857, his address at the time given as Homend Turnpike House, Ann died in 1861.

Elizabeth married Frederick Smith in March 1856 the bride's residence given as Southend Street showing that John and Maria were in the Toll House at that time.
They had Clara Maria baptised on Nov 2nd 1856 and Frederick James in 1865.

Arthur John Brown, b 1886, was the third son of William Henry b 1861, an Ironmongers Porter of Albert Road, Ledbury and his wife Jane.
Arthur was briefly in the army from February 13th to July 3rd 1905 discharged as an invalid. Married Nellie b 1883 from Marylebone in 1908.